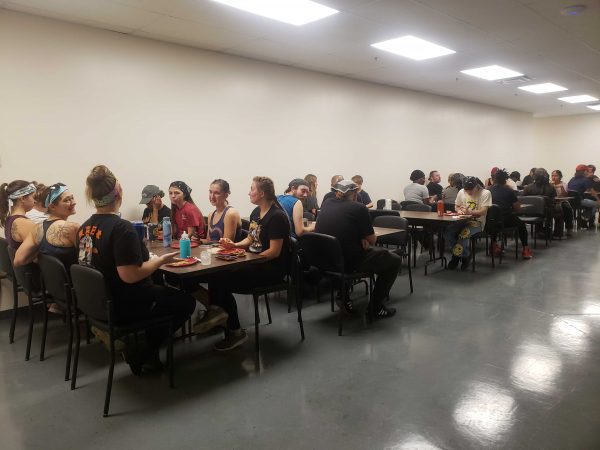 Our team’s first lunch in our new break room!

It’s been a challenging year.

This, you may already have guessed.  At multiple points this year, packages were delayed longer than we wanted them to be (and longer than is acceptable).  We let you down.

What we want you to know right now is, we accept responsibility for what happened.  It’s our fault that we didn’t plan better, make better choices, and create a better customer experience.  And we’re working right now to fix that, so that 2023 will be much better.

We did want to take the time to tell you what happened behind the scenes to create the situation…and all the things we’re doing to make that better.

Earthley is in an interesting place as a business.  We’re not a mom-and-pop company anymore, but we’re not a “big” business yet.  We’re kind of in the middle.  From the fall of 2021 through this year, we have outgrown a lot of things that used to work for us.  That includes a lot of our equipment, our building, and even policies and procedures (heck…even our leadership team has had to grow a whole lot).  Many things fundamentally changed…or will in the coming months.

What will never change is our commitment to using completely clean ingredients, remaining independently owned, and making affordable and effective products!  Doing all that at a brand-new scale is one reason it’s so challenging! 🙂

This is a timeline of some of the challenges we faced this year:

We realized in the fall of 2021 that we were outgrowing our building, but we could not find the right new space for awhile.  The real estate market was just as tight for commercial rentals as it was for residential rentals and purchases!  We finally found a building and signed the contract in March, hoping that we could start construction on upgrades immediately and move in by June, July at the latest. 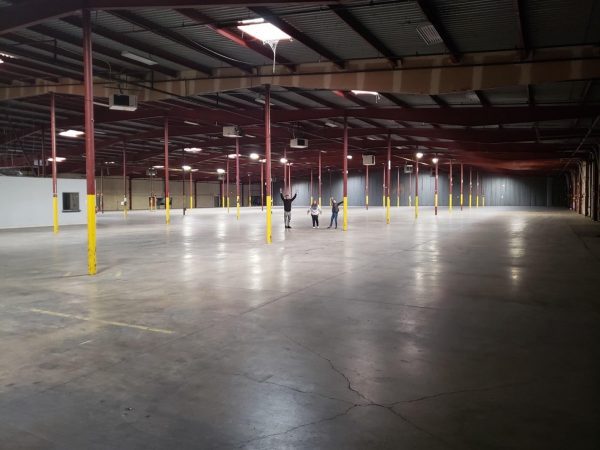 The building lease is signed!

Construction on the building proceeded, but it took longer than expected.  There were constant delays, and we had difficulties sourcing some of the materials needed.  We continued to push through in hopes of moving as soon as we could.  This is a project that we paid for in cash, slowly over several months…and it was not small!  But it was important to us to both build out the space correctly (with isolated rooms for the production of powdered products, special air handlers for working with lye or allergens, plenty of power for our equipment, commercial dishwashers and sinks, and a lot more) and not take on debt to do it.

During this time, we also identified a fully-automated tincture line that would speed up our production capabilities, and we put a down payment on it in June.  We were told that delivery would come mid/late September, and we planned for it to be operational well before Black Friday so we could prep.

In the mean time, the team was absolutely crammed in our building, doing their best to get products made and shipped with very little space!  They definitely felt the tension of all the limitations we faced in that building (little room to move; shared workspaces; not much storage) and were looking forward to the move! 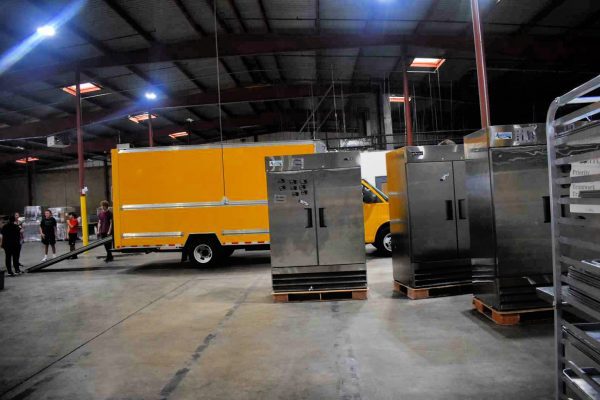 Moving things in our truck!

In early July, we identified a new shipping system.  We had outgrown our old one, which required orders to be printed and picked by hand from a small wall.  It was easy to mix up similar-looking products.  We were also using envelopes for most orders still.  Our new shipping system would be much more professional, with scanners to double check every single item we were picking.  It would cut down significantly on mistakes…and also improve efficiency for the team.

This shipping system was implemented end of July/beginning of Aug!  It definitely led to some slow-downs for the first week or so, as everyone was re-trained on the new system (plus we had to entirely rearrange the shipping area, with still-limited space).  But after that, things began to improve.

We desperately needed some new production equipment, as well as more production staff…but we had no space for either!  Hiring was on hold until the move could be completed.

The building inched along….  It was substantially ready in August, but we still had to wait for the various inspectors to clear it for provisional occupancy.  This took weeks longer than expected, and we were finally cleared by mid-September.

The move started immediately!  Our permit was announced late morning on a Friday, and the team cheered when the news came through.  They began to pack things into boxes and onto pallets in preparation to move to the new building — which was just down the street from our old one (within walking distance).

The move took place over about a two-week period.  Packing up and moving wasn’t really the hard part!  Unpacking, setting up, and getting operational again was.  It was definitely stressful on the staff, who were trying to simultaneously complete the move, find things, organize them, and get to producing again as quickly as they could.  September sales had been stronger than expected and they were struggling to keep up. 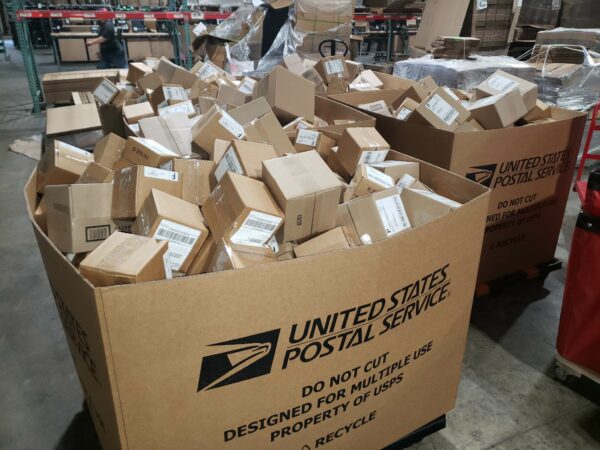 Half a shipping day!

Each week, things slowly got a little bit better.  Things got unpacked and put away.  People got used to working in the new building.  We began to catch up.  The original plan had been to be caught up months earlier, once we had the space to store more raw materials and finished goods, but that hadn’t been possible.  We had also planned to spend nearly three months preparing ahead of time for Black Friday — but we didn’t have as much time as we’d hoped.

The team did their very best.  We scrambled to order new materials once settled in the new building, and start producing more and more items.  The team began working Saturdays to produce more (most people worked 1 – 2 Saturdays during the fall, and it was voluntary; the leadership team members worked a lot more!).

Our tincture line was, like everything else, delayed.  We expected it in mid/late Sept but it didn’t actually show up until mid-Nov.  Our excitement over its arrival was overshadowed by the fact that Black Friday was imminent, and we had to stay focused on producing as much as we could with the ways that we knew.  We did get the tincture line operational about two weeks after Black Friday…which was very exciting!  (See it HERE.)

In early Oct, it was decided that our former shipping supervisor (Tyler) would be transitioning to a new role within the company, and his dream job — video work.  We were all very excited about it (and you can see what we’ve been up to on our YouTube channel).  But it meant we had to hire a new supervisor!  That process took about a month, and Angel S joined the team the second week of November.  We were very excited to have her!

That takes us to the last few weeks!  Black Friday went very well, and we had an incredible 24,000 orders in just 5 days.  The team worked Friday and Saturday to start shipping them out, and has continued to work Monday – Saturday since. 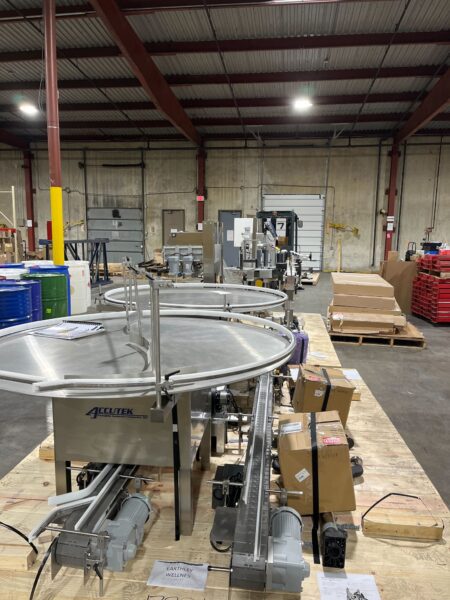 The tincture line entered the building!

In addition to this general timeline, we have done a lot of “behind the behind scenes” work!

We implemented a leadership training program called “Earthley’s Leadership Institute” to give team members a path to learn and grow with the company.  Everyone is encouraged to attend if they have an interest in a future leadership role.  We meet monthly, and provide them with books and resources to learn in between.

We provided additional leadership training and coaching to our existing leadership team, so that they can continue to grow and gain the skills they need to help us at the next level!

We have worked to create new structure and support for the teams, including adding “5S” to the warehouse for organization, daily huddles, quarterly all-hands meetings, standard work checklists, a custom inventory management system, and whatever else that either we felt they could benefit from or they requested.  The leadership team has worked closely with all team members to ensure they feel supported, heard, and have what they need to do their jobs efficiently.

We have done all of this during a year (or three!) of external challenges, while raising pay rates for our team, without raising our prices to customers.  We have remained fully, entirely committed to our mission the whole way!

It has been a YEAR!

The worst is over.

It’s been tumultuous.  We’ve been telling our team all year “this is the year of infrastructure.”  We have been building towards bigger and better, and that has meant some serious growing pains.  But we’re on the other side of most of it now.

In 2023, we plan to continue down this path…and add some amazing new things that will benefit both our team and our customers.  It’s been incredibly important to us all along to do things the right way, to plan for long-term growth (even it means a few bumps in the short-term).

We’ll be adding more new equipment to our production floor next year.  This will include a fully-automated molten line (which makes our lotions).  We’ll also be improving our tincture straining process (we still have a 5-gal press!) and our soap powdering and mixing process.  A lot of this equipment will be added in the first 6 months of the year, as quickly as we can manage to do it.

We’ve been in process since 2021, but we’ll be finishing our organic and non-GMO certifications next year!  We’re very excited to prove our commitment to quality by obtaining these third-party certifications.  Look for these by mid-year.

This, too, has been in process for a long time (long enough that it’s almost an inside joke!), and is nearly done.  The website is custom-coded and will allow us to do a lot of new things for customers — including faster checkout times, subscribe and save, wish lists, and more.  We’re really looking forward to this!

In addition to all of these things…you’ll be able to expect faster shipping times, some new products (no more info on that yet; R&D is in the early stages!), more video content, an herbal course, a cookbook, more children’s books on natural living, and a whole lot more.  We’re here to serve you as best we can. 🙂

We very much appreciate your understanding and patience as we have walked through this tough year.  There are only better things on the horizon for everyone!

Free shipping for all US retail orders over $50. Dismiss